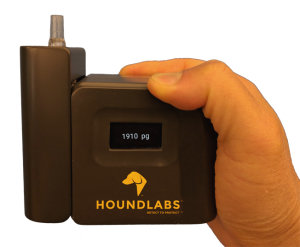 American police have for the first time used a marijuana breathalyzer to evaluate impaired drivers, the company behind the pioneering device declared Tuesday, saying it separately confirmed its breath test can detect recent consumption of marijuana-infused food.

The two apparent firsts allow Hound Labs to move forward with plans to widely distribute its technology to law enforcement in the first half of next year, says CEO Mike Lynn.

Lynn, an emergency room doctor in Oakland, California, also is a reserve officer with the Alameda County Sheriff's Office and he helped pull over drivers in the initial field tests, none of whom were arrested after voluntarily breathing into the handheld contraption.

Two people admitted smoking marijuana within the past 30 minutes, Lynn says, and in a satisfying validation for his technology -- created with University of California chemistry assistance -- their readouts were much higher than the rest.

Other drivers, he says, admitted to smoking marijuana within the two-to-three-hour window that the device appears able to detect the high-inducing compound THC (tetrahydrocannabinol) on a smoker's breath, and the test confirmed it.

"Basically everyone agreed because they were curious," Lynn says. "We were not trying to arrest people. ... Sure, we could arrest people and people are arrested every day for driving stoned, but the objective was not to put people in jail but to educate them and use the device if they volunteered so we could get the data."

The technology, if all goes according to plan, will be welcomed by both sides of the pot legalization debate, those who fear drugged drivers and reformers outraged that pot users in some jurisdictions are subjectively detained and forced to undergo blood tests that don't prove impairment, especially in frequent users.

The drivers stopped in the initial field testing were seen driving erratically or had committed a traffic infraction, Lynn says, and though no recent marijuana user was arrested, they were forced to find another ride home.

A drunk driver was arrested during field testing, he says.

All drivers tested were stopped by Lynn and at least one other officer, he says. Lynn declined to confirm if the officers were from the Alameda County Sheriff's Office, where he works, and a department spokesman did not reply to a voicemail requesting comment.

Police Bigotry and the Drug War

The War on Drugs Meets the War on Immigrants