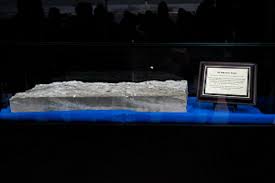 Or perhaps the State's officiates are already preparing as one of their holiest days approaches, much as Christians meditate during Lent. At any rate, last Thursday, September 1, "Transportation Security Administration officials from Washington Dulles International Airport" held a "ceremony," during which they "unveiled a memorial piece of limestone taken from the Pentagon following the terrorist attack on Sept. 11, 2001."

This bit of rubble, "measuring 31 inches long, 13 inches deep, 4 inches high and weighing 110 pounds," looks curiously pristine in pictures. (One report claims, "The stone shows damage from the attack…," but I don't see it. My favorite shot shows the TSA's thugs apparently mistaking it for the Holy Grail, so avidly are they photographing it).

No doubt, we are to infer that this icon hails from the damaged area of the Pentagon, just as we are to believe that terrorists would attack the ol' Homeland but for Our vigilant, valiant Rulers. Yet the debris' immaculate appearance belies that implied history. Indeed, so spotless is it that one heretic asks, "What is the significance of this piece of limestone? … Is every piece of masonry that was left after 9/11 significant?" Let's hope this guy goes to ground before the Warriors on Terror find and burn him at the stake.