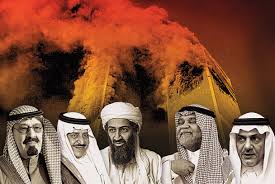 Such painstaking work can serve a variety of purposes. It can be used to embarrass or discredit an innocent person or organization that has an unhelpful position on an important issue and is in the way of an agenda. It can be used as a red herring to draw attention away from a failing explanation of an event by producing an alternative false explanation. I forget what Angleton called them, but the strategy is to have within a false story other stories that are there but withheld because of "national security" or "politically sensitive issues" or some such. Then if the official story gets into trouble, the backup story can be released in order to deflect attention into a new false story or to support the original story. Angleton said that intelligence services protect their necessary misdeeds by burying the misdeed in competing explanations.

Watching the expert craftsmanship of the "Saudis did 9/11" story, I have been wondering if the Saudi story is what Angleton described as a story within a story.

The official 9/11 story has taken too many hits to remain standing. The collapse of Building 7, which, if memory serves, was not mentioned at all in the 9/11 Commission Report, has been proven to have been a controlled demolition. Building 7 collapsed at free fall acceleration, which can only be achieved with controlled demolition.

Over 100 firemen, policemen, and building maintenance personnel who were inside the two towers prior to their collapse report hearing and experiencing multiple explosions. According to William Rodriguez, a maintenance employee in the north tower, there were explosions in the sub-basements of the tower prior to the time airplanes are said to have hit the towers.

An international team of scientists found in the dust of the towers both reacted and unreacted residues of explosives and substances capable of instantly producing the extreme temperatures that cut steel.