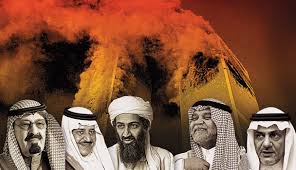 News reports about the recently released 28 pages of the Joint Inquiry into the 9/11 attacks are typically dismissive: this is nothing new, it's just circumstantial evidence, and there's no "smoking gun." Yet given what the report actually says – and these news accounts are remarkably sparse when it comes to verbatim quotes – it's hard to fathom what would constitute a smoking gun.

To begin with, let's start with what's not in these pages: there are numerous redactions. And they are rather odd. When one expects to read the words "CIA" or "FBI," instead we get a blacked-out word. Entire paragraphs are redacted – often at crucial points. So it's reasonable to assume that, if there is a smoking gun, it's contained in the portions we're not allowed to see. Presumably the members of Congress with access to the document prior to its release who have been telling us that it changes their entire conception of the 9/11 attacks – and our relationship with the Saudis – read the unredacted version. Which points to the conclusion that the omissions left out crucial information – perhaps including the vaunted smoking gun.

In any case, what we have access to makes more than just a substantial case: it shows that the Saudi government – including top officials, such as then Saudi ambassador to the US, Prince Bandar bin Sultan, and other members of the royal family – financed and actively aided the hijackers prior to September 11, 2001.

Support for at least two of the hijackers when they arrived in the US was extended by three key individuals:

Omar al-Bayoumi – Bayoumi was clearly a Saudi intelligence agent: the FBI all but identifies him as such. His salary was paid for by companies directly owned and operated by the Saudi government, although he apparently rarely showed up for 'work.' He was directly subsidized by the wife of then Saudi ambassador Prince Bandar, and these subsidies were substantially increased when the hijackers arrived in the US. It was Bayoumi who hovered over two of the hijackers – Nawaf al-Hamzi and Khalid al-Midhar – as soon as they arrived in the United States. He got them an apartment, co-signed the rental agreement, chauffeured them around – and helped them obtain information on flight schools.

Osama Bassnan – This individual, who, according to the report, has 'many ties to the Saudi government,' boasted to an informant that he did more for the two hijackers than Bayoumi. He was certainly in a position to do so, since he lived directly across the street from them in San Diego. The FBI characterized him as 'an extremist and supporter of Osama bin Laden': like Bayoumi, his longtime associate – with whom he was in constant communication at the time of the hijackers' American sojourn – Bassnan was subsidized by the Saudi royal family, and specifically Prince Bandar and his wife. A search of Basnan's apartment turned up indications that he had cashiers checks amounting to $574,000. Bandar's wife's account had a standing arrangement to send monthly checks to Basan's wife for 'nursing services.' There is no evidence that such services were ever performed. The suppressed 28 pages cite direct payments from Prince Bandar to Basnan:

Shayk Fahah al-Thumairy – He was a diplomat at the Saudi consulate in Los Angeles and imam of the King Fahad mosque, which is a focal point of Muslim-Saudi activity in the area. US intelligence avers that 'initial indications are that al-Thumairy may have had a physical or financial connection to al-Hamzi and al-Midhar.' Both attended the King Fahad mosque. Thumairy was interviewed by US law enforcement after fleeing to Saudi Arabia, and denied having any contact with the two hijackers – in spite of evidence that he was in telephonic contact with them. This, he asserted, was an attempt to 'smear' him.

The two hijackers had extensive contacts with Saudi naval officers in the United States, according to telephone records. And when Abu Zubaydah, one of the 9/11 conspirators, was captured in Pakistan, they found the phone number of a Colorado company that managed "the affairs of the Colorado residence of the Saudi Ambassador." Prince Bandar is practically the star of the suppressed 28 pages – no wonder the Bush administration, which had close ties to him, fought so hard to keep this secret.