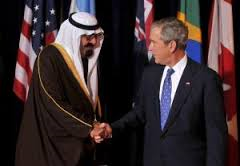 The missing 28 pages from the 9/11 report begins as follows:

"While in the United States, some of the September 11 hijackers were in contact with, and received support from, individuals who may be connected to the Saudi Government..."

The "28 pages," the secret document was part of a 2002 congressional investigation of the Sept. 11 attacks and has been classified since the report's completion. As CNN reports, former Sen. Bob Graham, who chaired the committee that carried out the investigation and has been pushing the White House to release the pages, said Thursday he was "very pleased" that the documents would be released.

The pages, sent to Congress by the Obama administration, have been the subject of much speculation over what they might reveal about the Saudi government's involvement in the attacks masterminded by terrorist Osama bin Laden when he led al-Qaeda.The pages were used by the 9/11 Commission as part of its investigation into the intelligence failures leading up to the attacks.

A telephone number found in the phone book of al-Qaeda operative Abu Zubaida, who was captured in Pakistan in March 2002, was for an Aspen, Colo., corporation that managed the "affairs of the Colorado residence of the Saudi Ambassador Bandar," the documents show.