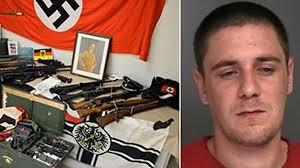 Suffolk County, New York police arrested Edward Perkowski on Thursday after the police allegedly found in a raid of his home items including tens of thousands of dollars in cash, several guns and knives, ammunition, a bit of marijuana and illegal mushrooms, and some bomb-making instructions. Oh yeah, the town of Brookhaven condemned Perkowski's house to boot. This appears to be yet another example of a government cracking down on people for nonviolent actions. In this case we have a convergence of the wars on cash, guns, and drugs, as well as government's intolerance of free speech.

Here is another important aspect of this story: Suffolk County Police Commissioner Tim Sini is stirring up fear that Perkowski and his brother Sean, who was also arrested, are dangerous because they are Nazis. The brothers might even have been planning a mass killing like we saw in Orlando, Florida last week, Sini suggests.

The evidence for the brothers' supposed Nazism is apparently that a Nazi flag, framed photo of Adolph Hitler, and other materials related to Nazi ideas were found in the house. Of course, the presence of such items in a house does not establish that any of the house's occupants subscribe to any particular ideology. Plenty of people interested in history have such items. Plenty of American soldiers, after being deployed to Europe in World War II, returned to America with such items as well. In fact, Tania Lopez reports at Newsday that relatives of Perkowski say the Nazi stuff belonged to Perkowski's grandfather, a World War II veteran.

Think Global Vaccine Passports Are Scary? Wait Until You See What's Next.

Every Deleted Parler Post, Many With Users' Location Data, Has Been Archived

Wrapping up 2020: Top 5 Android Threats You Need to Know