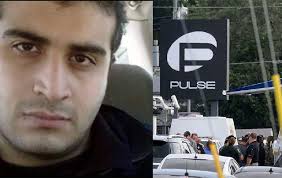 The owner of a Florida gun store said he tried to alert the FBI to a "very suspicious" man later identified as Orlando nightclub shooter Omar Mateen after Mateen tried to buy body armor and bulk ammunition from the store.

Robert Abell, a co-owner of Lotus Gunworks in Jensen Beach, Florida, told ABC News today that a man entered the store five or six weeks ago and asked specific questions about high-end body armor. When employees said the store didn't carry the body armor he wanted, Abell said, the man made a phone call in a foreign language, hung up and then asked about ammunition in bulk.

Abell said a member of his staff thought the questions were "odd" and made him uncomfortable, so he turned the man away.

Abell added that they thought the man was "very suspicious," so they called the local FBI office in West Palm Beach and reported the incident. But they didn't have the man's name, since no sale was made, and the only surveillance footage they had was grainy.

If It Bleeds It Leads: How the American Media Perpetuates and Profits from Mass Shootings

Unbelievable! The Feds Knew And Did NOTHING??