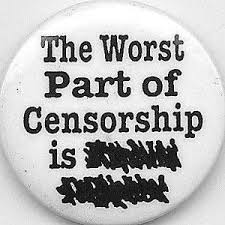 Freedom of speech is the right to communicate one's opinions and ideas without fear of government retaliation or censorship.

This is a clear and simple definition of freedom of speech.  The "right" is an individual's right against the government; there is no such "right" against other individuals.  Of course, as Rothbard has very well explained, the phrase "freedom of speech" only confuses the matter – the issue is one of property rights.

The Cato Institute announced today [May 11, 2016] that Flemming Rose, Danish journalist and author of The Tyranny of Silence, will receive the 2016 Milton Friedman Prize for Advancing Liberty, a $250,000 biennial award presented to an individual who has made a significant contribution to advance human freedom.

In 2005, Rose, then an editor at the Danish newspaper Jyllands-Posten, sparked worldwide controversy when he commissioned and published 12 cartoons meant to depict the prophet Muhammad.

Flemming Rose criticized no government, nor was he persecuted or censored by his government for this action.

The illustrations, intended to draw attention to the issue of self-censorship and the threat that intimidation poses to free speech, provoked deadly chaos in the Islamic world and put Rose in the center of a global debate about the limits to free speech in the 21st century.

I don't see how Rose advanced human freedom in any meaningful or sustainable way.  I do see that he advanced "deadly chaos" – precisely that which governments thrive upon for sustenance.

I find nothing to suggest that his action has anything to do with the concept of freedom of speech.  What did he say against the government?  Did the speech violate a government censor?  Was he persecuted by the government in some manner for his cartoons?

Nothing.  No.  No.  Yet it is for advancing freedom of speech that he is receiving this award.

What does Rose have to say about these cartoons?  He offers that there are two narratives, the first being about self-censorship – the narrative he holds:

Then, you have another narrative saying: This was not about free speech or self-censorship; it was about a powerful newspaper insulting a minority. This was a fair argument until the moment when the threats were issued."

"There are those who viewed the cartoons that I published as a form of incitement, but I don't think a statement should be measured by the response it yields, especially if the response is irrational and stupid."

The response does not change the fair argument.

Self-censorship is an important concept in the realm of speech among and between private individuals – it demonstrates both respect and humility.  To not self-censor is a sign of immaturity.

We see this in the protestors at Trump rallies; we see this in the so-called "safe spaces" erupting at college campuses across the country.  Obnoxious, spoiled children unable or unwilling to self-censor.  Are these brats deserving of this Cato award next year? (Probably, yes, now that I think about it; or maybe a Students for Liberty award of some kind.  A gold plated pacifier, perhaps.)

For some reason – just a few short months after this burst of so-called free speech and tearing down the walls of self-censorship – Jyllands-Posten matured; the editors found religion:

On 8 February 2006, Flemming Rose said in interviews with CNN and TV 2 that Jyllands-Posten planned to reprint satirical cartoons depicting the Holocaust that the Iranian newspaper Hamshahri planned to publish. He told CNN "My newspaper is trying to establish a contact with that Iranian newspaperHamshahri, and we would run the cartoons the same day as they publish them". Later that day the paper's editor-in-chief said that Jyllands-Posten under no circumstances would publish the Holocaust cartoons and Flemming Rose later said that "he had made a mistake". The next day Carsten Juste, the editor-in-chief of Jyllands-Posten, stated that Flemming Rose was on indefinite leave because he needed time off.

This just five months after taking on Muhammad.  I guess there are some minorities / religions about whom self-censorship = freedom of speech.

As if to demonstrate that Rose himself does not understand the concept of freedom of speech, here commenting on the Charlie Hebdo attacks:

In response to the Charlie Hebdo attacks, Rose commented "These murders challenge democracies in the most sickening style. They present a terrible threat to the free speech that is the foundation of true democracy"

I have previously written about the fallacy of the freedom of speech narrative regarding the Charlie Hebdo attacks.  Certainly one is free to speak out against and regarding private individuals in a rudest and demeaning manner.  One is also free to face the consequences – be they justifiable consequences or not.  Sometimes one should expect a good punch in the nose for an offending comment – the punch perhaps a violation of the NAP, but useful in establishing societal boundaries of acceptable behavior.

Demonstrating that he does not understand anything about the fabric that holds society together:

Rose argued in the interview that "it is discriminatory toward Muslims to say that we should not make fun of their religion when we are making fun of everybody else's religion…."

One might consider that making fun of Christianity is one reason for the death of Europe. Where is the religion?  Where is the common culture?  On what basis will societal relationships hold together?  Those toiling tirelessly in Brussels are hoping that the answers to these questions will lead Europeans to worship the EU.

I do not intend to get into the issue of Rose's cartoons provoking deadly chaos in the Islamic world – this is an issue for another time and perhaps another writer.  For now, suffice it to say that to glorify him with an award for freedom of speech (that had nothing to do with freedom of speech) for cartoons that then resulted in "deadly chaos" seems to me at least somewhat distasteful.

Do you want to see free speech?  There are countless individuals around the world who have spoken out against their government who are now sitting in prison or suffering other consequences at the hands of their government.  Award one of them this prize.

Instead of speech that makes government uncomfortable, Cato awards speech that is aimed at demeaning private individuals.  This is the pinnacle of freedom in 2016 for Cato.

For a New Libertine

Flemming Rose did nothing more than the screaming juveniles (in maturity if not age) do in our time; he created his own safe space by destroying all that was around him. Instead of speech that puts him in the cross-hairs of the government punishment apparatus, he takes advantage of a government subsidy of protection in order to avoid or minimize the private consequences of rudeness and immaturity (whether or not the consequences are a violation of the NAP is irrelevant; a rude comment will deservedly receive a punch in the nose).

From this, I conclude that taking advantage of a government subsidy is worthy of a freedom award at Cato.

Facing the risk of consequences is a great disciplining force; government ruins this at every turn.  It is no wonder why.  Facing the risk of private consequences in all aspects of life, including speech, is one means – and an effective means – in ensuring that respectful and civil behavior is maintained without the need of a monopoly provider or final arbiter.

From this I conclude that celebrating the loss of civility is worthy of a freedom award at Cato.