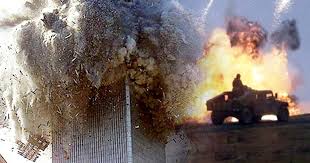 In response to the U.S. Senate's unanimous vote to allow 9/11 victims' families to sue Saudi Arabia in federal court, a report published in the London-based Al-Hayat daily, by Saudi legal expert Katib al-Shammari, claims that the U.S. masterminded the terror attacks as a means of creating a nebulous "enemy" in order garner public support for a global war on terror.

The report by al-Shammari, translated by the Middle East Media Research Institute (MEMRI), claims that long-standing American policy is "built upon the principle of advance planning and future probabilities," which the U.S. has now turned toward the Saudi regime after being successfully employed against first the Taliban and al-Qaeda, then Saddam Hussein and his secular Baathist controlled Iraq.

Al-Shammari claims the recent U.S. threats to "expose" documents implicating the Saudi government are simply the continuation of a U.S. policy, which he refers to as "victory by means of archive." He highlights that during the initial invasion of Iraq, under George H.W. Bush, Saddam Hussein was left alive and in power to be used as "a bargaining chip," but upon deciding that he was "no longer an ace up their sleeve" Washington moved to topple his government and install a U.S.-backed ruling party.

The terrorist attacks of 9/11 are now the "ace up the sleeve" of the U.S. government, according to al-Shammari.

"September 11 is one of winning cards in the American archives, because all the wise people in the world who are experts on American policy and who analyze the images and the videos [of 9/11] agree unanimously that what happened in the [Twin] Towers was a purely American action, planned and carried out within the U.S. Proof of this is the sequence of continuous explosions that dramatically ripped through both buildings… Expert structural engineers demolished them with explosives, while the planes crashing [into them] only gave the green light for the detonation – they were not the reason for the collapse. But the U.S. still spreads blame in all directions. [This policy] can be dubbed 'victory by means of archives."

The impetus behind the attacks, writes al-Shammari, was to create "an obscure enemy – terrorism – which became what American presidents blamed for all their mistakes" and that would provide justification for any "dirty operation" in any nation.

According to al-Shammari's report in Al-Hayat:

"On September 11, the U.S. attained several victories at the same time, that [even] the hawks [who were at that time] in the White House could not have imagined. Some of them can be enumerated as follows:

1. The U.S. created, in public opinion, an obscure enemy – terrorism – which became what American presidents blamed for all their mistakes, and also became the sole motivation for any dirty operation that American politicians and military figures desire to carry out in any country. [The] terrorism [label] was applied to Muslims, and specifically to Saudi Arabia.