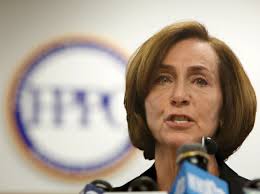 First Came the Drudge Link. Then the Death Threats. Ann Ravel was a relatively unknown government official, until her words got featured on the Drudge Report. Soon, the trolls were screaming at her to drop dead. – Center for Public Integrity

In this article, Ms. Ravel, a Commissioner on the Federal Election Commission (FEC), complains about the lack of civility that she experienced when she suggested publicly that the FEC ought to reexamine its policies toward the Internet.

Ms. Ravel believes she should be recognized for her determination to utilize her powers responsibly. It seems clear the Center for Public Integrity agrees.

Ravel makes her discomfort known in this article in part because she is shocked by the reaction she received when she suggested that she used the power she had lawfully acquired.

Those who attacked Ms. Ravel via anonymous 'Net comments obviously believed she had in mind exercising more control over 'Net commentary.

She even received death threats, which understandably upset her greatly.

In October 2014, then-Federal Election Commission Vice Chairwoman Ann Ravel did what she often does: speak her mind about political campaign issues.

"A re-examination of the Commission's approach to the Internet and other emerging technologies is long overdue," Ravel, a Democrat, wrote in lamenting a deadlocked commission vote over whether an Ohio-based business group must include disclaimers on political ads it posted for free on YouTube.com.

But Ravel's statement—just finding it on the FEC's website is no small feat—didn't disappear into the Internet's bowels as bureaucratic missives often do.

Instead, in a sign of how toxic American politics have become, it spawned unbridled ugliness, including death threats that have drawn the attention of law enforcement.

The article goes on to tell us that Ravel's comments were featured on Drudge under the headline, "DEMS ON FEC MOVE TO REGULATE DRUDGE."

It was this incendiary headline that motivated the attacks on her. She was called a fascist and urged to die. "Go fall down about ten flights of stairs," was one comment.

Another: "Keep it up, and the pitchforks will come out and then you and your ilk will have no place to hide and the People will have their justice."

The initial threats were issued back in October 2014 but Ravel recently voted to sanction conservative filmmaker Joel Gilbert "for alleged violations of federal election laws."

The FEC deadlocked but her vote started the abuse again. She received one comment comparing her to Hitler.

The article goes on to point out that "such vitriol and vulgarity," were never previously aimed at quasi-anonymous federal election regulators.

The article quotes Scott Thomas, a Democratic FEC commissioner from 1986 to 2006 and three-time chairman as saying, "It reflects a coarsening of the thinking process for some people—lack of a filter, lack of civility … A lot of people now seem to be going off the edge."

We also learn that Ravel "received extra security protection during a public forum in 2015."

Ravel, the article reports, joined the FEC in late 2013 and is often an advocate for stronger election rules and enforcement. She has occasionally been seen as confrontational within the context of accusing Republicans of failing to enforce certain election laws.