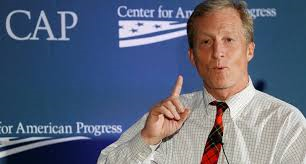 Steyer is close to John Podesta and his Soros funded Center For American Progress. When 'science' is god, the end justifies the means.

Steyer's NextGen Climate super PAC, a political group that raises funds to boost candidates with strong environmental platforms, said the campaign aims to boost turnout of millennials, who have become one of the largest potential voter groups.

In the lead-up to the November general election, NextGen will deploy hundreds of organizers across over 200 colleges to register young voters and facilitate on-campus voting.

"We are determined that they will be a difference maker," Steyer told reporters on a conference call.

Escobar: Why The New Silk Roads Are A "Threat" To US Bloc

2020 FINANCIAL CRISIS | Has it started? The $500 Billion Dollar Question

One ping after another: why everyone needs a notification detox

Homesteaders, catastrophists run for the hills to flee U.S. uncertainty