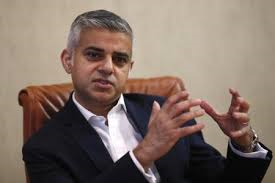 Polls show Khan, the son of a bus driver, is as much as 20 percentage points ahead of rival Conservative Zac Goldsmith in the race to run one of the world's top financial centres. If he wins, he will succeed current Conservative mayor Boris Johnson to become the first Muslim to head a major Western capital.

London's population of 8.6 million is among the most diverse in the world and it is rare for identity politics to enter British campaigning.

But Goldsmith, with the support of Prime Minister David Cameron, has for weeks focused on Khan's faith and past appearances alongside radical Muslim speakers, accusing him of giving "platform, oxygen and cover" to extremists.

Former human rights lawyer Khan says he has fought extremism all his life and regrets sharing a stage with speakers who held "abhorrent" views.

He has accused Goldsmith, the elite-educated son of a billionaire financier, of using Donald Trump-style tactics to divide Londoners along faith lines, as well as being part of an out-of-touch wealthy elite.