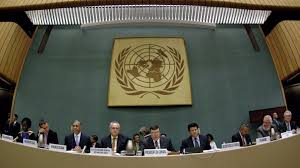 30 March 2016: In the context on the 2030 Agenda for Sustainable Development, the UN Economic and Social Council (ECOSOC) organized a Special Meeting on Inequality to consider key drivers of inequality, and propose policy solutions. Participants discussed tackling inequality as a moral imperative and goal of the 2030 Agenda, and policy priorities to address inequality at national, regional and global levels. An informal President's summary of the Meeting is expected to inform the work of the 2016 session of the High-level Political Forum on Sustainable Development (HLPF).

Opening the meeting on 30 March 2016, at UN Headquarters in New York, US, ECOSOC President Oh Joon noted that inequality is more than an issue of income and wealth disparities; these challenges are compounded by unequal access to basic human needs such as food, healthcare, education, drinking water and sanitation. Oh reported that: seven out of ten people in the world live in countries where income inequality has risen, "in many cases, to the highest level in 30 years;" women in rural areas remain three times more likely to die in childbirth than those in urban areas; persons with disabilities are up to five times more likely to incur catastrophic health expenditures; and children born in poorer households are less likely to complete their primary education. He added that social and political instability can lead to the emergence of extremism.

Jan Eliasson, UN Deputy Secretary-General, noted that inequality features prominently in the Sustainable Development Goals (SDGs), including in Goal 5 (Achieve gender equality and empower all women and girls), Goal 10 (Reduce inequality within and among countries) and as a cross-cutting issue that permeates practically all 17 Goals and their targets. Eliasson called for reaching "those furthest behind first," and said reducing inequality should be a core benchmark by which the 2030 Agenda's achievement will be measured. On inequality between countries, he cited illicit financial flows, financial manipulations, tax evasion and lack of harmonization of tax codes among countries, as contributing factors. At the national level, he highlighted steps taken by countries to contain or reduce inequalities, including: debt restructuring and prudent fiscal stimulus; commitments to expand equal opportunity, social protection and universal access to public goods and services; investments in public infrastructure; robust, transparent and inclusive institutions; and seizing the potential of financial technology to promote financial inclusion. Eliasson said inequality is not a value-free measure of economic activity, but is increasingly harmful, "pushing societies towards polarization and fracture," and condemning children to "lives of hardship."

Jonathan Ostry, International Monetary Fund (IMF), remarked that more equal societies tend to grow faster, and a more equal society grows more sustainably. Similarly, Jeffrey Sachs, Columbia University, reported that a study carried out by the Bertelsmann Foundation concluded that the more equal a society, the closer it is to achieving the 17 SDGs.

Denise Dresser, Instituto Tecnológico Autónomo de México, outlined some causes of inequality in Mexico, such as dysfunctional political economy, "crony capitalism" and corruption. Others highlighted the contribution of youth unemployment and climate change impacts to the issue of inequality. Several speakers said freedom and equality go hand-in-hand, and are not necessarily "fighting each other," with Thomas Pogge, Yale University, noting that the fight for equality is also the fight for more freedom.

Many speakers outlined the multiple dimensions of inequality and its cross-cutting nature in the 2030 Agenda, and emphasized the importance of: addressing the structural barriers that lead to exclusion; universal access to healthcare, nutrition and quality education; improving market access, data availability and disaggregation; partnerships based on dignity and equity; official development assistance (ODA); inclusive growth; and fair trade and taxation. Marcos Bonturi, Organisation for Economic Co-operation and Development (OECD), noted the relevance of the Automatic Exchange of Information in Tax Matters for preventing tax evasion.

Thailand for the Group of 77 and China (G-77/China) said addressing inequality among countries must be one of the UN's main tasks, and called for enhanced representation and voice for developing countries in decision-making processes. The EU noted that inequality and poverty go hand-in-hand, and stressed the importance of intergenerational equity and of eliminating all forms of discrimination. Canada said addressing inequality is a priority internationally and nationally, and the country is refocusing its assistance to the poor and most vulnerable. He noted measures adopted in Canada in this regard including enhancing employment insurance and improving access to quality education for indigenous peoples. Iran noted that poverty and extremism contribute to increased inequality in the Middle East.