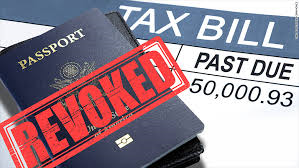 But instead, the TSA man tells you your driver's license is no longer accepted as identification for domestic flights. He asks you for your passport.

Unfortunately, you don't have a passport. A few months ago, you received a letter from the State Department stating that since you owed the IRS money, your passport was hereby revoked, effective immediately. It further ordered you to turn your passport in.

You're officially grounded – courtesy of the IRS.

How could this happen? Thank Congress for enacting a pair of obscure laws, one in 2005 and another in 2015.

#1 The Real ID Act of 2005 established federally mandated "national uniform standards" for driver's licenses… 43 separate requirements in all. State driver's licenses that fail to conform to these standards are no longer valid for any federal "official purpose." Examples of "official purposes" include boarding an airplane, buying a firearm, or even entering a federal courthouse.