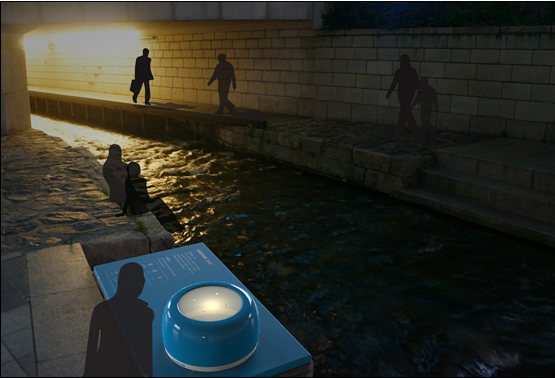 The stations used the force of the river to turn turbines and generate electricity. This year at Austin's SXSW festival, the company has demonstrated that it's been able to shrink the concept down to fit easily in anyone's hand – or backpack.

Also called Enomad, the bullet-shaped device is about the size of a thermos. Remove the white translucent cover and you reveal four propellers that flip down and lock into position. Once the device is assembled, you can simply place it into any flowing water source to charge it up. Alternatively, it can be towed behind a kayak or any other water vessel. The idea is to get the propellers spinning to turn an internal turbine that charges up the onboard 5,200 mAh battery.

Company representatives told Gizmag that the battery takes about two hours to charge in a normally flowing stream. Once charged, you can disassemble the rotor section from the base, where USB charging ports are revealed. The, 5,200 mAh battery should be able to charge an iPhone 6 roughly twice.

ANOTHER fire breaks out at a power station in Iran following a string of explosions...

HOW TO GARDEN IN A TINY SPACE - GREENSTALK VERTICAL PLANTER