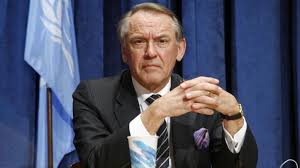 The United Nations is pleased with the ongoing global efforts to implement the Sustainable Development Goals countries committed to implement to improve the lives of their citizens, according to Jan Eliasson, U.N. Deputy Secretary-General.

Last September, 190 world leaders pledged their commitment to 17 SDGs to end extreme poverty, fix climate change, and fight inequality and injustice, in a bid to attain an equitable, more prosperous and sustainable world.  The SGDs are intended to stimulate action during the next 15 years in areas of critical importance.

In an exclusive interview with VOA, Eliasson expressed optimism about how the SDGs are being translated into national realities, strategies and plans.

"They are already starting to implement them on a national level.  This is the first year, this is the second month, and already we have close to 25 nations wanting to tell us, in summer when we have a big meeting about implementation, what they are doing," said Eliasson.

"This has come through as goals which are universal, (and) should be accepted by all and lived up to by all, rich and poor. That they are built on sustainability, by that uniting the agenda of the Sustainable Development Goals with the climate change agenda.  That they are inclusive, that it has to reach everybody, and that we must have the ambition to fight inequalities and reach those who are furthest behind – leave no one behind, we say.  So it's a message of solidarity."

Eliasson said the goals affect all sectors of government and society, and are unlikely to be achieved unless the focus is on all aspects of how the government is organized, including the transportation systems, agricultural structures, industrial structures, migration, and urbanization, among others.

"These sectors are traditionally known as domestic, but that is not correct anymore.  In today's world, we are interdependent and these goals are interrelated, so we need to take away that false – artificial, at least – line between national and international," said Eliasson.

"In today's world, the good international solution (to) migration, climate change, is in the national interest of member states.  That is a new culture and we need to really make sure that everybody has a responsibility now to contribute.  And that's a cultural change, which usually takes some time. But I am encouraged that this new thinking is taking hold, and leading to positive movements and decisions by member states."

Eliasson says there is a need to focus on the circumstances and root causes leading to conflicts, with aim of solving them and even preventing them

"You have a quarter of a billion people living in countries where they were not born and where they are not citizens; you have 60 million refugees and displaced people," he said. "We need to see these new trends, like climate change and migration, international organized crime … We have to find ways of dealing with them, because if we or international organizations or national institutions don't deliver, we will feed that frustration and that disillusionment that exists with so many people," he said.