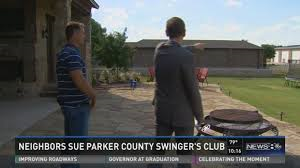 Randy Carter is being sued by his HOA for throwing the large, late night parties the neighbors consider a nuisance.

Dubbed online as the "Naughty Neighbors" club, Carter's home is listed on websites for the swingers' community, with set hours and entry fees.

"Extremely busy, loud, lots of traffic. It was a nightly thing," said Chase Patterson, who lives next door.

Patterson says the HOA's lawsuit has brought those crazy nights to an end, but he's curious to see the guest list and who it was keeping his family up late.

"We were told one evening that there were several judges and attorneys on it. So I'd be curious to see if that's the case. We've been told everything else under the sun, too, though," he said.