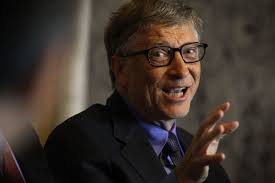 Microsoft founder Bill Gates set himself apart from other Silicon Valley CEOs when he pledged his support to the FBI, and criticized Apple for refusing to comply with the government's order to "build a backdoor" into the iPhone.

While Apple CEO Tim Cook said that creating the technology to break into an encrypted iPhone "has implications far beyond the legal case at hand," Gates told Financial Times that he disagrees with Cook's interpretation of the request.

"Nobody is talking about a 'backdoor,' so that's not the right question," Gates said. "This is a specific case where the government is asking for access to information. They are not asking for some general thing, they are asking for a particular case."

The "particular case" that Gates is referencing is the iPhone used by Syed Farook, who is a suspect in the shooting that killed 14 people and wounded 22 in San Bernardino, California, in December. Last week, U.S. Magistrate Judge Sheri Pymordered Apple Inc. to break into Farook's iPhone to access its data.

However, in a letter to customers last week, Cook asserted that the government's order was for Apple to create "a new version of the iPhone operating system, circumventing several important security features, and install it on an iPhone recovered during the investigation."

BOMBSHELL: Covid-19 isn't a pandemic plan, it's an EXTERMINATION plan for humanity