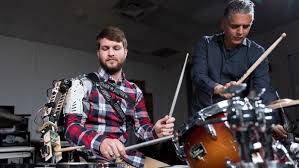 Thumping out as many drum beats in 60 seconds may get you a podium spot at the annual World's Fastest Drummer competition, but we'll take the full kit virtuoso playing of Cozy Powell, Philthy Animal Taylor or Mitch Mitchell any day of the week. When trying to emulate the fastest or the greatest on your bedroom bin-bashers, though, you'd be forgiven for wishing you had a third arm. Georgia Tech Professor Gil Weinberg and his research team may have the answer to your prayers. They've developed a drumstick-wielding wearable robotic limb that's able to respond to both the music being played and the movements of the player.

This latest project follows the creation in 2014 of a robotic prosthetic arm for drummer Jason Barnes. While cleaning out a restaurant exhaust duct in early 2012, Barnes got a nasty shock. More than 22,000 volts in fact. The accident eventually led to his right arm being amputated. Not wanting to give up on his percussive passion, he hacked a prosthetic arm. Though effective, it wasn't ideal. Professor Weinberg and team stepped in and created a double-stick robotic arm.

The "third arm" wearable is aimed at anyone who wants a helping hand while sat in the drum cage. The robotic device is attached to a musician's shoulder and is reported capable of determining the layout of kit components and the direction and proximity of the human arms, thanks to built-in accelerometers, and change playing location accordingly. If the human arm moves to play a hit-hat, for example, the robot arm adjusts to play the ride cymbal, when the player paradiddles on the snare, the attachment moves to the tom at the side.

The actual beats played are based on sounds detected in the room, with the drumstick pounding out improvisations built around the speed and rhythm of the player. Motors on the robot arm ensure that the stick is always positioned parallel to the playing surface and movements are said to be natural thanks to programming based on motion capture technology.