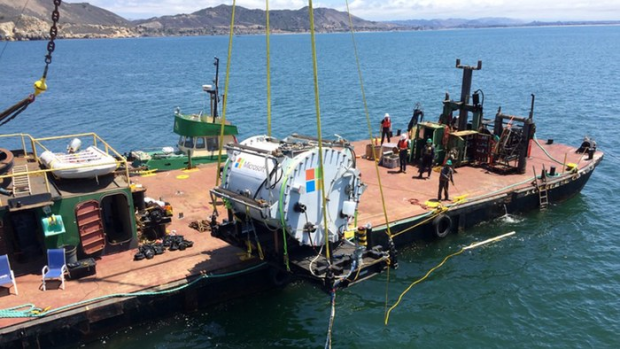 These data centers use a lot of power, they create a lot of heat, and it helps if they're close to populated areas. While we've already seen some creative approaches to meeting these needs, Microsoft recently announced that it's tried something else yet … it anchored an unmanned data center to the bottom of the sea.

Called Project Natick, the 2015 experiment involved housing a data center inside a watertight 38,000-lb (17,237-kg) cylindrical vessel measuring approximately 10 x 7 feet (3 x 2 m). Anchored over half a mile (0.8 km) off the US Pacific coast, the unit used as much computing power as 300 desktop PCs.

It spent three months underwater starting last August, run and monitored from shore by remote control. All of its cooling needs were met simply by the cold seawater surrounding it, which drew heat away through heat exchangers on the vessel's outer steel shell. Although it was powered by the local electrical grid, such underwater data centers could conceivably be run off of renewable sources such as wave or tidal power.