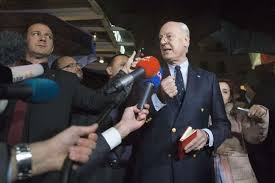 Another senior U.N. official said the Russian escalation was the main reason for the suspension of the peace talks, which have made little progress since beginning earlier this week.

Staffan de Mistura announced a three-week pause in the Geneva talks, the first attempt to negotiate an end to Syria's war in two years, saying they needed immediate help from the rival sides' international backers, principally the United States and Russia.

"I have indicated from the first day that I won't talk for the sake of talking," the envoy, who has described the negotiations as Syria's last hope, told reporters.

"I think the special envoy decided to suspend the talks because the (United Nations) did not want to be associated with the Russian escalation in Syria, which risks undermining the talks completely," the official said.