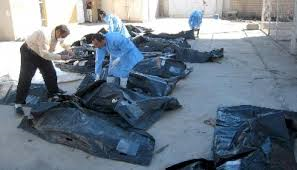 The Islamic State, Naqshbandi Army, and other militant groups lost 3,478 in fighting or by execution. Another 261 were reported wounded.

The United Nations also released its casualty figures for January. They estimate that 849 Iraqis were killed and 1,450 were wounded. At least 490 of those killed and 1,157 of the injured were civilians. They do not count casualties in Anbar nor among the militants. However, the numbers from Anbar province's health department are 56 killed and 248 injured.

Combining the two counts, at least 4,409 were killed, and another 1,959 were wounded. In light of the fighting in Anbar province and the recapture of Ramadi, it stands to reason that these numbers are low. They should be considered conservative estimates at best. The Iraqi government appears to be concealing the number of security casualties, while at the same time over-estimating militant deaths. The actual figures may never be known.