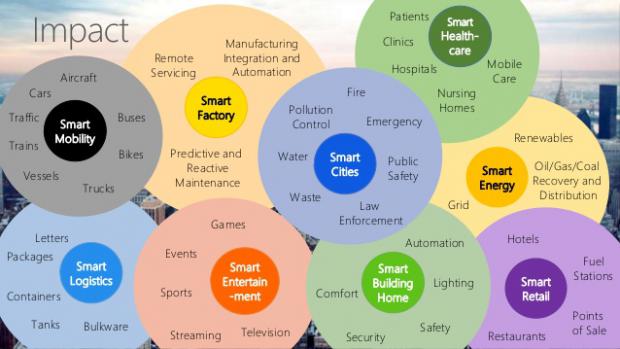 TN Note: One key take-a-way from this article is that "the main impetus behind the ramped up industrialization in Germany lies not so much with the consumer, but the potential benefits to multinational industrialists that will be its earliest adopters." Again, consumer demand had nothing to do with it, just like the rollout of Smart Grid in the U.S. when President Obama quietly slipped hundreds of millions in stimulus money to U.S. utilities to roll out the technology. It was all driven by corporate technocrats in collusion with public funds.

It's 7 AM, April 13th, 2025. Your smart clock rouses you from a dreamless sleep and you climb from bed as your house comes to life. The bathroom light turns itself on and the shower begins to heat its water. After washing off, you throw on a T-shirt which has been perfectly fit for your body. You check your phone, only to discover that its battery is about to give out. A push notification informs you that there is no need to worry—a replacement is already on its way. You hear your car start in the garage, ready to take you down to the factory you manage, where, according to your phone, one of the machines has malfunctioned. Actually traveling to your place of work has become an increasingly rare phenomenon for you—most of the time the factory takes care of itself.

"What a pain in the ass," you mutter as your car pulls itself out from your garage. "Can't these things get anything right, anymore?"

Welcome to life after the fourth industrial revolution, where all of the objects you use on a day to day basis are custom-made and constantly talking to one another for your benefit.

The phrase "industrial revolution" probably conjures up foggy memories of sitting in high school history class bored out of your mind. Wasn't there something about a steam engine? Yes, there was—and in the two centuries since James Watt's vapor powered technology inaugurated the transition to mass production, there have been two more: in the late 1800s, based around electrification and division of labor, and in the late 1900s, with the rise of information technology.

Three years ago the Germans predicted a fourth, one which promises to dramatically transform the workplace and finally make the entire world of objects revolve around you.

The fourth industrial revolution, more commonly known as "Industry 4.0," derives its name from a 2011 initiative spearheaded by businessmen, politicians, and academics, who defined it as a means of increasing the competitiveness of Germany's manufacturing industries through the increasing integration of "cyber-physical systems," or CPS, into factory processes.

CPS is basically a catch-all term for talking about the integration of smart, internet-connected machines and human labor. Factory managers are not simply reimagining the assembly line, but actively creating a network of machines that not only can produce more with fewer errors, but can autonomously alter their production patterns in accordance with external inputs while still retaining a high degree of efficiency.

In other words, Industry 4.0 is the production-side equivalent of the consumer-oriented Internet of Things, in which everyday objects from cars to thermostats to toasters will be connected to the internet.

This would be a "completely new approach to production," according to a rep?ort released in 2013 by the Industrie 4.0 Working Group, a conglomerate of major industrialists, artificial intelligence experts, economists and academics.

The German go?vernment readily endorsed the idea, announcing that it would be adopting a "High Tech Strategy" to prepare the nation.

The approach has not only found massive support in Germany, but is increasingly demanding attention elsewhere in the world as well. The United States, for instance, was quick to follow Germany's lead and established a non-profit Industrial Inte?rnet consortium in 2014 which was led by industry giants such as General Electric, AT&T, IBM, and Intel.

One of the more tangible aspects of the fourth industrial revolution is the idea of "service oriented design." This can range from customers using factory settings to produce their own products, to companies tailoring individual products for individual consumers.

The potentials enabled by this mode of production are enormous. For example, the communication between smart products on the Internet of Things and the smart machines manufacturing them on what GE calls the "Industrial Internet" means that objects will be able to monitor their own use and determine when they are going to give out.

If your phone knows that it is going to "die" in the near future, it can notify the factory, which can alter its production levels to reflect the data coming in from the smart objects produced there. When your phone kicks the bucket, there will already be another one waiting for you, meaning the days of back-ordering are numbered.

What's more, as this process becomes more sophisticated and integrated, your phone will arrive already programmed with your custom settings, just like how you had it when it gave out on you a few hours ago.

Buchanan: The 'New Systemic Racism' That Is Coming

We Are All Prisoners of Groupthink

What Makes You Think The Stock Market Will Even Exist In 2024?

The Second Wave: Regardless of What You Think About the Virus, Things Are About to Change

Dr. Fauci is No Nostradamus: How COVID-19 Ran Amok Under His Watch

World in 2030 With Faster Battery Improvements

Tucker Carlson 2024? The GOP is buzzing