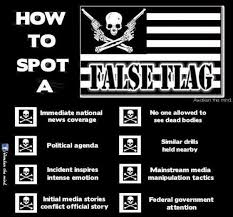 In the following instances, officials in the government which carried out the attack (or seriously proposed an attack) admit to it, either orally, in writing, or through photographs or videos:

(1) Japanese troops set off a small explosion on a train track in 1931, and falsely blamed it on China in order to justify an invasion of Manchuria. This is known as the "Mukden Incident" or the "Manchurian Incident". The Tokyo International Military Tribunal found: "Several of the participators in the plan, including Hashimoto [a high-ranking Japanese army officer], have on various occasions admitted their part in the plot and have stated that the object of the 'Incident' was to afford an excuse for the occupation of Manchuria by the Kwantung Army …." And see this.

(2) A major with the Nazi SS admitted at the Nuremberg trials that – under orders from the chief of the Gestapo – he and some other Nazi operatives faked attacks on their own people and resources which they blamed on the Poles, to justify the invasion of Poland.

(3) Nazi general Franz Halder also testified at the Nuremberg trials that Nazi leader Hermann Goering admitted to setting fire to the German parliament building in 1933, and then falsely blaming the communists for the arson.

(4) Soviet leader Nikita Khrushchev admitted in writing that the Soviet Union's Red Army shelled the Russian village of Mainila in 1939 – while blaming the attack on Finland – as a basis for launching the "Winter War" against Finland. Russian president Boris Yeltsin agreed that Russia had been the aggressor in the Winter War.

(5) The Russian Parliament, current Russian president Putin and former Soviet leader Gorbachev all admit that Soviet leader Joseph Stalin ordered his secret police to execute 22,000 Polish army officers and civilians in 1940, and then falsely blamed it on the Nazis.

(6) The British government admits that – between 1946 and 1948 – it bombed 5 ships carrying Jews attempting to flee the Holocaust to seek safety in Palestine, set up a fake group called "Defenders of Arab Palestine", and then had the psuedo-group falsely claim responsibility for the bombings (and see this,this and this).

(7) Israel admits that in 1954, an Israeli terrorist cell operating in Egypt planted bombs in several buildings, including U.S. diplomatic facilities, then left behind "evidence" implicating the Arabs as the culprits (one of the bombs detonated prematurely, allowing the Egyptians to identify the bombers, and several of the Israelis later confessed) (and see this and this).

(8) The CIA admits that it hired Iranians in the 1950′s to pose as Communists and stage bombings in Iran in order to turn the country against its democratically-elected prime minister.

(9) The Turkish Prime Minister admitted that the Turkish government carried out the 1955 bombing on a Turkish consulate in Greece – also damaging the nearby birthplace of the founder of modern Turkey – and blamed it on Greece, for the purpose of inciting and justifying anti-Greek violence.

(10) The British Prime Minister admitted to his defense secretary that he and American president Dwight Eisenhower approved a plan in 1957 to carry out attacks in Syria and blame it on the Syrian government as a way to effect regime change.