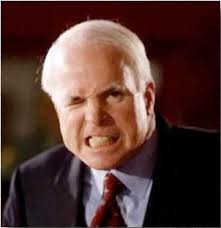 December 14, 2015, was a good day for John McCain. It was a less good day for Sergeant Bowe Bergdahl, General Robert Abrams, and the military justice system. It was a middling sort of day for the U.S. Constitution, although it hadn't been directly involved except insofar as Mr. McCain showed once again that the kind of due process the Constitution contemplates can prevent desired outcomes in some criminal proceedings.

John McCain's problem with the Constitution did not start with Bowe Bergdahl. It first came to light when Dzhokhar Tsarnaev, one of the Boston Marathon Bombers, was apprehended. On April 23, 2013, eight days after the Boston bombing took place and within a few hours after Tsarnaev was captured, Senators John McCain and Lindsay Graham issued a statement that appeared on Mr. Graham's face book page in which they said, in part: "It is clear the events we have seen over the past few days in Boston were an attempt to kill American citizens and terrorize a major American city. The accused perpetrators of these acts were not common criminals attempting to profit from a criminal enterprise, but terrorists trying to injure, maim, and kill innocent Americans. Now that the suspect is in custody, the last thing we should want is for him to remain silent. It is absolutely vital the suspect be questioned for intelligence gathering purposes. . . .