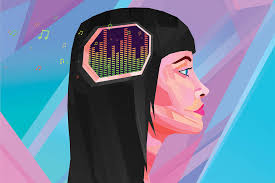 THE YEAR IS 2040, and as you wait for a drone to deliver your pizza, you decide to throw on some tunes. Once a commodity bought and sold in stores, music is now an omnipresent utility invoked via spoken- word commands. In response to a simple "play," an algorithmic DJ opens a blended set of songs, incorporating information about your location, your recent activities and your historical preferences—complemented by biofeedback from your implanted SmartChip. A calming set of lo-fi indie hits streams forth, while the algorithm adjusts the beats per minute and acoustic profile to the rain outside and the fact that you haven't eaten for six hours.

The rise of such dynamically generated music is the story of the age. The album, that relic of the 20th century, is long dead. Even the concept of a "song" is starting to blur. Instead there are hooks, choruses, catchphrases and beats—a palette of musical elements that are mixed and matched on the fly by the computer, with occasional human assistance. Your life is scored like a movie, with swelling crescendos for the good parts, plaintive, atonal plunks for the bad, and fuzz-pedal guitar for the erotic. The DJ's ability to read your emotional state approaches clairvoyance. But the developers discourage the name "artificial intelligence" to describe such technology. They prefer the term "mood-affiliated procedural remixing."