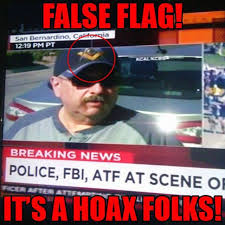 Witness Sally Abdelmageed, who works at the Inland Regional Center and witnessed the shooting in San Bernardino, was interviewed live via telephone by CBS Evening News the day the massacre happened.

The news anchor begins "She saw the attackers enter the building, and we spoke to her by phone."

"We saw three men dressed in military attire," she says. "I couldn't see his face, he had a black hat on... black cargo pants on, the kind with zippers on the side... He had a huge assault rifle a lot of ammo..."

She continues, "They opened up the door to building then he starts to, you know, shoot all over into the room - that's the room we have conferences in..."

"As I was talking to the dispatch, we went into my manager's office and locked the doors..

"Mrs. Abdelmageed, can you describe to me in as much details as you can what did the gunman look like?" the CBS anchor asks.

"I couldn't see his face, he had a black hat on. All I could see was a black hat, black long-sleeved shirt...
He had extra ammo. He was probably ready for something, to reload - I don't know know..."

"I just saw three, dressed exactly the same." They looked like they were athletic build, and um, they appeared to be tall..."

"You're certain that you saw three men?" the news anchor asks.