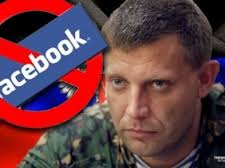 On October 29, Fort Russ published the report of Novorossia.su that head of the Donetsk People's Republic Alexander Zakharchenko had launched his own official Facebook page in order to "inform the public how things are in our republic, Ukraine, Russia, and the world in general by using modern tools of communication" and "increase transparency and political dialogue in the Donetsk People's Republic." Zakharchenko confirmed to RusVesna that the new Facebook page was indeed his own.

However, according to a Facebook post being circulated among Western supporters of the DPR, Facebook has blocked Zakharchenko's page. Here is the notification, taken from the account of Zak Novak, an American volunteer in Novorossiya, which is spreading across social networks:

'A couple of hours ago I discovered that my page in Facebook had been blocked for no apparent reason. It is noteworthy that the page went dead immediately after I published my message to the Ukrainian people on the occasion of the anniversary of Ukraine's liberation from Nazi invaders,' Zakharchenko's press service quotes him as saying.