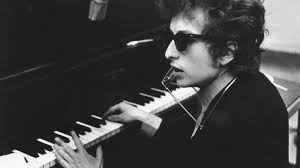 Within 14 months in 1965 and 1966, Bob Dylan recorded three albums, swinging from the acoustic folk of Bringing It All Back Home to the blues of Highway 61 Revisited to "that wild mercury sound" of Blonde on Blonde. The song versions that made it onto these albums shaped music history. As for the versions that didn't, you can now shape them yourself.

In those legendary recording sessions at Studio A, Dylan did it live. Rather than recording bits and pieces and mixing them together into the final version, he and his band played a song again and again, experimenting with different versions, before settling on a final take. That richness of unused material has provided ample fodder for alternative take albums. Now with Studio A Revisited, Dylan fans can tap into those archives and get behind the mixing board themselves.

The microsite is being launched today in conjunction with the release of The Cutting Edge 1965-1966: The Bootleg Series Volume 12—a monster six-disc set of bootleg tracks from that 14-month period in the 1960s. It lets users manipulate different instrument stems to remix classic Dylan songs and check out the rejected outtakes and song snippets alongside photos and stories from the studio on an interactive timeline. How would a frenetic, drum-heavy "Like a Rolling Stone" have a different feel? Would a slowed down, sing-song version of "Can You Please Crawl Out Your Window?" change its meaning? Studio A Revisited lets you find out.