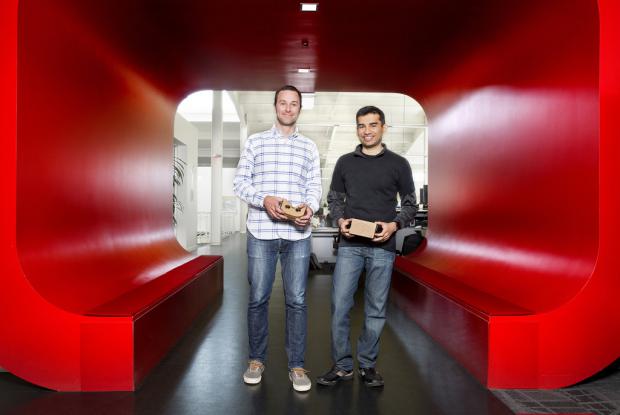 It's a rare sunny day in Seattle, Washington, and I'm standing in the grass outside a nondescript office building with engineers in hoodies strolling nearby. One of them, weirdly, is riding a unicycle. I look behind me; there's a canal, with water streaming by soothingly. I look down and notice a dark, narrow shadow in the grass. Maybe it's the shadow of a strangely shaped tree? I look up—yes, there are a few trees around, but none that would cast a shadow that looked that misshapen.

"There's a weird shadow on the ground," I say out loud, knowing someone would be able to explain it to me.

"Oh—that must be the Jump camera rig." I hear the disembodied voice of Husain Bengali, a product manager at Jump, Google's virtual reality platform.

Time to get back to reality. I lower Google's virtual reality set, Cardboard, that I've been holding up to my face, and instantly I'm back in a spartan room—which had been scrubbed clean of confidential blueprints before my arrival, I'm told—at YouTube's headquarters in San Bruno, California. Bengali was showing me the first ever 360-degree virtual reality video made by his team, hastily filmed right outside the Jump offices by Lake Washington Ship Canal in Seattle. "After we created that video and I watched it, that was the first moment I realized our team was on the right track," Bengali beams. He's part of the group leading the charge for innovative virtual reality video formats, and I'm getting a demo of the work they're releasing to the world today as part of YouTube's big, um, jump into VR.