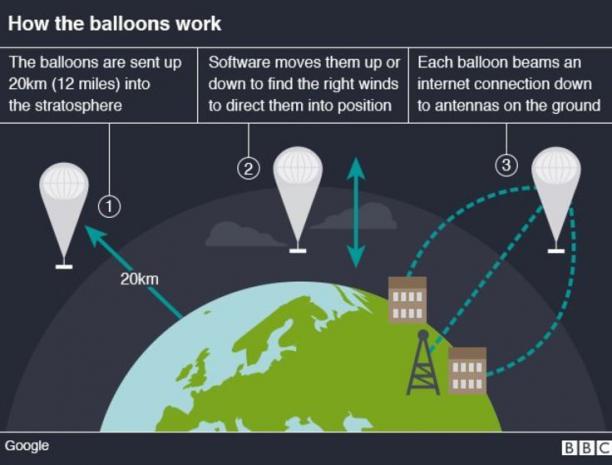 It told the BBC the move would let it trial a continuous data service to people living below the balloons' path.

The declaration coincides with the announcement that three of Indonesia's mobile networks intend to start testing Project Loon's transmissions next year.

One expert said the plan had benefits over other solutions.

Sri Lanka previously signed a separate agreement signalling its wish to be another participant in the giant helium balloon-based scheme.

Google first revealed its superpressure balloon plan in June 2013, when about 30 of the inflatable plastic "envelopes" were launched from New Zealand.

Beneath each lighter-than-air balloon are hung:

an altitude control system, which is used to move the balloon up and down to find winds that will take it in the desired direction

solar panels to power all the gear

The original set-up provided 3G-like data speeds, but the kit can now supply connected devices with about 10 megabits a second to connected devices via antennae on the ground. For comparison's sake, the average 4G connection in the UK is 15Mbit/sec.