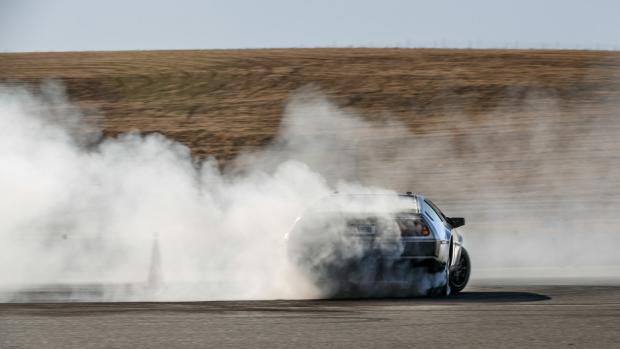 A team of Stanford University researchers has taken the iconic car and made it autonomous. But they aren't interested in building a polite robo-car that putters around suburban roads or cruises the open highway. No, their DeLoren likes to drift–and excels at it.

Now, burning rubber may seem like the last thing an autonomous vehicle ought to do, but the gearheads at Stanford's car-focused Revs Center said there's legit reasons for it. "We think automated vehicles should be able to execute any maneuver within the physical limits of the vehicle to get out of harm's way," says Chris Gerdes, a professor of mechanical engineering and director of the Revs Center. In a nod to Back to the Future, they called their DeLorean MARTY: the Multiple Actuator Research Test bed for Yaw control.

The team found inspiration in rally racers, who are some of the best drivers in motorsports. Top-tier rallying often requires sacrificing stability for controllability and speed, which is why drivers often drift through corners. Even though the car slides through a turn, drivers can make it doexactly what they want. Most people have no idea how to do that, but there's no reason a computer can't be programmed to do that if it is the best way out of a dangerous spot. The way the guys at Revs Center see it, autonomous cars should be able to drift, even if they don't leave flaming skid marks.

The researchers started the project in May, 2013, with the purchase of a decent DeLorean. They bought one for $22,000 from a guy in Sausalito used it as a daily driver.