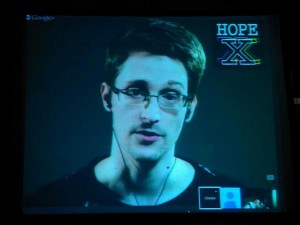 The NSA in the U.S., and its equivalent in the UK, GCHQ, are taking control of your phone not just to spy on you as needed, but also to use your device as a way to spy on others around you. You are a walking microphone, camera and GPS for spies.

Snowden, in a BBC interview, explained that for the most part intelligence agencies are not really looking to monitor your private phone communications per se. They are actually taking over full control of the phone to take photos or record ongoing conversations within earshot.

According to Snowden, the UK's spy agency, the Government Communications Headquarters, uses NSA technology to develop software tools to control almost anyone's smartphone. He notes that all it takes is sending an encrypted text message to get into virtually any smartphone. Moreover, the message will not be seen by the user, making it almost impossible to stop the attack.

How the House Armed Services Committee, in the Middle of a Pandemic, Approved a Huge...

Russia-Baiting Is the Only Game in Town

Hawaii: New Bill Would Give Health Director Power to Call a Health Emergency and Impose Quarantines

Safety First Is A Bad Ideology