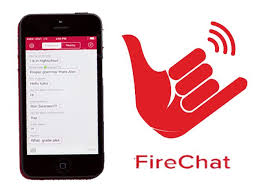 Last fall hundreds of thousands of pro-democracy protesters took to the streets of Hong Kong and encountered a serious logistical issue: Their phones weren't working. The sheer number of people concentrated in the area crushed the network, crippling their main form of communication. At a time when staying in touch was critical, it became impossible.

And then something interesting happened. People began chatting with each other, but not over Wi-Fi or data networks. It was via FireChat, a new app from the company Open Garden. FireChat, like the similar Serval Project, builds mesh networks by connecting smartphones via the device's Bluetooth or peer-to-peer Wi-Fi. This effectively turns every smartphone with FireChat into a node that can carry and deliver text messages. The big idea is that instead of relying on a centralized ISP or telecom company to provide service, people are able to build their own decentralized network that can grow as large as there are people who have the app downloaded. In the case of FireChat, these messages end up in either a massive group chat or can be encrypted and delivered as a private message by hopping from phone to phone until it reaches its intended recipient. "In a sense it's like a blind postman," says Christophe Daligault, Open Garden's chief marketing officer.

Since the app launched in the spring of 2014, it's been used in Hong Kong, Iraq, France, and Ecuador during major protests and natural disasters (more than 500,000 people downloaded the app over the course of a couple days in Hong Kong). It's also, we should note, wildly popular with the Burning Man set. As of today, though, FireChat is attempting to organize its biggest network yet. The company just announced it's partnering with Marikina, a city of 400,000 that makes up metro Manila in the Philippines, to build a city-wide mesh network that can be used during natural disasters.

The Philippines, which gets hit with an average of 20 typhoons a year and is situated along the Pacific ring of fire, is a natural disaster hotspot, making it a perfect test bed for the app. "No one in the Philippines has forgotten typhoons Ondoy and Yolanda, we need all the help we can to be ready," says Marikina's vice mayor, Jose Fabian Cadiz.