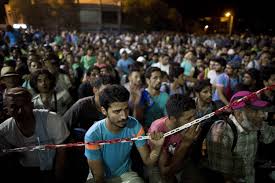 Never let a crisis go to waste is the theme of the left. Every crisis must be used to seize power, money and property for the agendas of the left. The Muslim migrant crisis in Europe is no different……(more)

Swedes' homes may be confiscated to accommodate asylum seekers using obscure legislation from 1992, the "Threat and Risk Assessment Commission" established that the Swedish government should have the option to seize property, especially summer homes, from the Swedish people in a time of crisis.

It was monstrous that Nazi concentration camps like Buchenwald and Dachau, hallowed ground, have been used for this. Now they are seizing people's homes.

"German nurse shocked after being forced out of flat to make way for refugees," RT, 26 Sep, 2015

Having lived in the same flat for 16 years, a German woman is being forced to move out to make way for refugees, because building a new shelter is too expensive. The 51 year-old nurse, who has helped asylum seekers in the past, was shocked by the news.