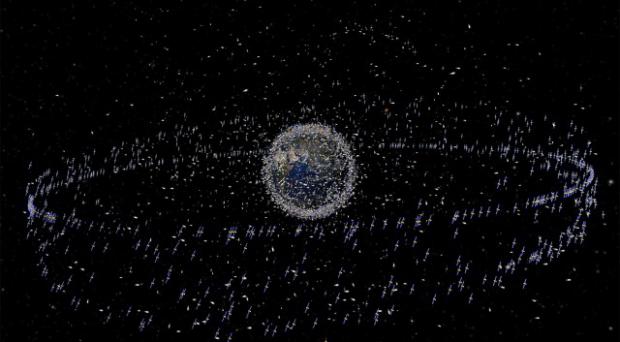 Samsung makes a lot of things that you might not realize, from medical technology to automated drone guns, but a new paper from the company's Texas head of R&D Farooq Khan shows just how widely the company is willing to think these days. Rather than proposing a new break into consumer or even corporate electronics, this report entitled Mobile Internet from the Heavens imagines a constellation of Samsung satellites orbiting the Earth, providing unlimited mobile internet to every corner of the planet.

The report lays out the case for and basic structure of a future Samsung space-based internet program. It notes that the global demand for data seems to be increasing by an order of magnitude (a multiple of ten) every five years or so. This means that by 2028, the human race may be chewing through a zetabyte of data per month — or about 200 gigabytes per month, for five billion users. The plan imagines a fleet of about 4,600 small satellites would be able to provide this amount of data — though there's no mention of what it might have to charge users to pay for it.

The longer, space-based path for information may actually be faster, if done correctly.

The paper proposes to get around latency issues by positioning the satellites physically closer to Earth than previous plans. Most modern communications satellites live in geostationary orbit, roughly 35,000 kilometers above the surface, and this imposes a hard limit on speed due to travel time for the data transmissions. Samsung wants to position its constellation in Low Earth Orbit (LEO) and thus reduce this delay — that's part of the reason it requires so many satellites, since no one individual unit will remain fixed over a particular patch of ground, and they have to compensate with sheer number of units.

To have both the coverage and the bandwidth required for modern internet use, the plan would require access to multiple areas of the RF spectrum, switching between them as necessary to maintain a wide and continuous connection.

THE BATTLE FOR MARS: HOW ELON MUSK, BLUE ORIGIN....