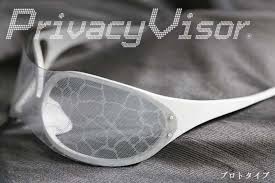 The development took place at Japan's National Institute of Informatics where researchers placed infrared LED's inside of glasses so they would trick facial recognition cameras.

"The Privacy Visor is the world's first product with this technology. We are often told not to unveil our personal information to others, but our faces are also a type of an ID. There should be a way to protect that," Professor Isao Echizen, one of the lead researchers told The Wall Street Journal.

The idea of the device came about as  Echizen discovered that Google face recognition technology was able to recognize individuals wearing five different types of sunglasses from various angles.

Face recognition technology is extensively used by law enforcement services, internet search engines and social networks. The technology also has been adopted by shops to collect statistical data about their customers for better marketing.

The Privacy Visor will be on sale in japan next summer for roughly $240.
This is just one of many creative ideas to avoid facial recognition technology. As we reported earlier this year, artist and activist Adam Harvey has intensively studied facial recognition software with the hopes of understanding how it can be undermined.  In his research, Harvey has discovered that people can trick facial recognition technology by adapting certain types of fashion trends that make their face asymmetrical and by covering certain key areas of the face that these programs are designed to detect.

US To BAN TikTok? - The TRUTH You Need To Know!

If Static Fires Are Good, SpaceX Could Test Launch SN5 to 150 Meters

Doug Casey on the Dangers of Global Regulation

How Far Will Trump Go to Keep the White House?