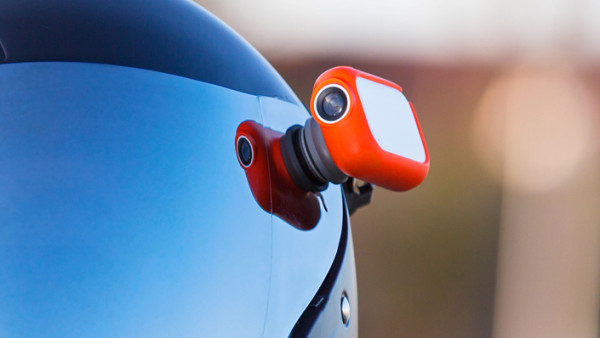 That always-on, always-recording feature forces you to view and edit hours of B-roll, just to get to the highlights of that awesome 720 backside grab you did on the halfpipe.

Enter Graava, a young startup with an artificially intelligent action camera that promises to do all your editing for you. The idea is that you'll shoot video all the time, and trust the camera to save the best bits. The Graava camera ($249 during pre-orders) is a keychain-sized gadget that looks like a Pico projector in an white, black, or orange plastic shell. It clips onto your helmet, handlebars, or wherever, and records everything in your direct line of vision. It shoots 1080p video at 30 frames per second, or 720p at 60 fps. As it's filming, Graava gathers data from its accelerometer, gyroscope, light sensor, GPS, and other sensors. That info—a landmark identified via the GPS or quickened heart rate picked up by your Apple Watch—tips Graava off to exciting moments buried in the footage.

The Graava founders reason that certain sensory spikes, like a savory smell, or an unusual sight, can indicate moments our brains would normally catalog. The camera does the same thing. A spike in heart rate or your speed, for example, might indicate a wicked descent on a trail. The camera uses those variations from the norm to rate events in the footage. You can also say "Graava" to the camera if you want to flag a moment it might not otherwise catch.

Measles Vaccination and Autism: The Inexcusable Suppression of a Long-Documented Link