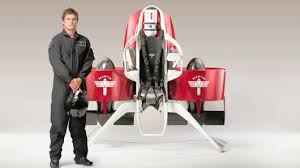 "It's a bird. It's a plane. It's a firefighter wearing a jetpack!" That could be something you find yourself saying as early as next year.

A company in New Zealand recently announced that its futuristic product — a fan-propelled, personal flying machine— will be commercially available during the second half of next year. But before you add the jetpack to your holiday wish list, check the price tag. It's expected to sell for around $200,000.

The pricey jetpack isn't just a toy for rich daredevils; it was designed with emergency first responders in mind, according to Martin Aircraft Co., which created this cool technology. [Hyperloop, Jetpacks & More: 9 Futuristic Transit Ideas]

The company sees the pack as a tool for "saving human lives," and some of the potential applications listed on its website include fire services, border patrol and search-and-rescue operations. Test flights for the Martin Jetpack began in 2013, and most recently, the pack made an appearance at the International Paris Air Show.

The pack lifts off the ground using a set of powerful fans, driven by a gasoline engine, that are attached to a carbon-fiber-and-aluminum frame. The contraption can stay in the air for about 30 minutes, and can reach speeds of 46 mph (74 km/h) and an altitude of 3,280 feet (1,000 meters), according to the Martin Aircraft Co. The metal ducts that surround the jetpack's fans are a safety feature that keeps the pilot, as well as anyone standing around the jetpack, away from the whirling fan blades.

Tesla supplier develops battery that will last for 16 years and a MILLION miles...

During Lockdown a Ghanaian Shoemaker Invented a Solar-Powered Hand-washing...

"Disinfecting Tunnels" Are Headed To Supermarkets In Post-COVID World

Japanese researchers unveil an INFLATABLE e-bike that weighs 12 pounds and can be...

Bone-inspired material ups its strength as more force is applied

Carbon Nanostructure Stronger than Diamond By Strength to Density