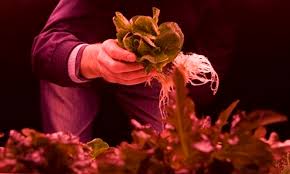 London, U.K. – In an amazing example of low-impact, high-yield farming, an underground urban farm has begun operation in London in old World War II tunnels beneath the city.

The Growing Underground is the world's first underground urban garden. It is an eco-friendly, sustainable farming business, which uses LED and hydroponics to produce a wide assortment of vegetables and herbs.

The farm will at first supply the local restaurant market, with the intent of selling to the public eventually. The program claims to be able to deliver "from farm to fork in under four hours."

"There's a growing demand for sustainably, locally grown produce in London," he told The Guardian. "I thought they were absolutely crazy but when I visited the tunnels and sampled the produce they are already growing down there I was blown away. The market for this produce is huge."

The WWII bomb shelters used for the farm are located 12 stories beneath the ground and were designed with the intent of housing 8,000 people during Nazi air raids. In fact, the depth actually provides a constant 16 degrees Celsius, which promotes a 52 week a year crop growing cycle.

The innovation of taking a space that had been unoccupied and seemingly useless and turning it into such a useful tool for urban gardening shows the vast potential free thinking.

With growing global food insecurity projected, groundbreaking food innovation's, such as Growing Underground, has the potential to become a model by which a true paradigm shift in farming could be realized.