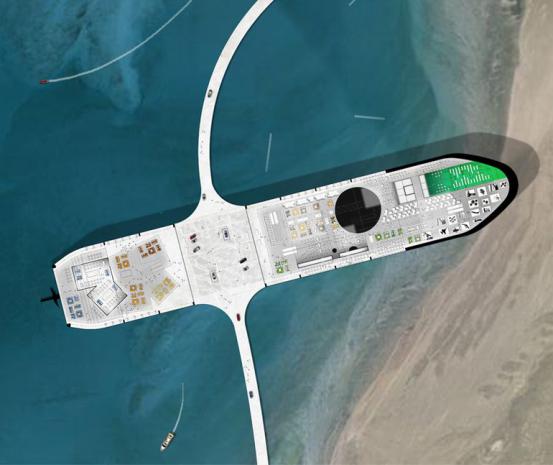 Chris Collaris, in collaboration with Ruben Esser, Sander Bakker, and Patrick van der Gronde, recently unveiled the Black Gold project: a vision for turning an oil tanker into a mixed-use structure in the Southern Gulf Region.

Right off the bat we should note that the Black Gold project looks purely conceptual, and thus we'd take this one with a pinch of sea salt. There's also a question as to whether reusing such large ships makes better environmental sense than simply recycling them.

That said, Collaris seems to view the Black Gold project not just as an example of adaptive reuse, but also as an opportunity to offer an alternative to what he sees as sub-par architecture in the region.

"The biggest concern in the newly grounded architectural culture of the post-global cities in the Gulf area can be described as an overdose of pretentious iconic buildings," says the architect. "By changing the function of the discarded mega oil tanker in a sustainable and functional way, the anchored mega ship can be kept as a true icon of the Arabic States in Southern Gulf region into the present and next era."