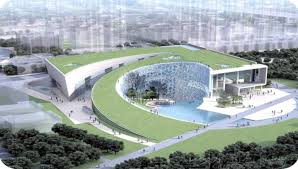 Global architecture firm Perkins + Will recently completed work on Shanghai's Natural History Museum and it's now open for business. With more than 10,000 artifacts from around the world stretched over 4.45 hectares (11 acres) of floorspace, it's a big and ambitious project that – while calling it sustainable would be a push – does boast a significant amount of green design.

Built following an international competition to replace the original Natural History Museum which existed on the same site, Perkins + Will's museum increases previous available exhibition space by some twenty times. It takes its place remarkably well among its surroundings too, sporting a mixture of themes that arguably don't sound like a good idea on paper, but work on the ground.

The museum is located near a sculpture park, so the firm blended the building in with the surrounding shapes and greenery, making it appear almost like an extension of the park. Its northern wall reflects the earth's shifting tectonic plates, but elsewhere the building draws cues from both traditional Chinese garden design and the chambered nautilus shell (a sea creature that has long provided inspiration for designers).