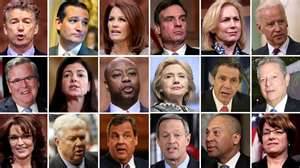 Of course most voters don't do this, and they certainly don't do it this early in the game. Too busy with the important things in life – family, friends, sheer survival – they wait until the final weeks of the campaign, when all is said and done, and then they judge a candidate on his or her connection to themselves and their lives, or by some alchemical standard of personality and "vibes." Do I trust this person? Do they mean what they say? Am I going to suffer or profit if they win the prize? These are the sorts of questions the average voter asks – and answers – before casting a vote.

But we aren't average, now are we?

In writing this, I'm assuming that, for the most part, my audience consists of what might be called ideological voters of a very specific kind. If you're reading this, you're probably more concerned about what a candidate for the White House thinks about the Middle East than what he or she would do about, say, climate change, or gay marriage, to name two issues off the top of my head. Furthermore, you have a certain view of what ought to be done – and not done – in that volatile region that has been and continues to be the scene of so much carnage, much of it inflicted by our own government.

Joe Biden's Promise: "I will work for Amnesty for all undocumented immigrants"