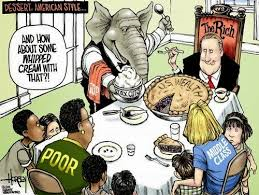 The American people remain eager to be persuaded that a new president in the White House can solve the problems that plague us. Yet no matter who wins this next presidential election, you can rest assured that the new boss will be the same as the old boss, and we—the permanent underclass in America—will continue to be forced to march in lockstep with the police state in all matters, public and private.

Indeed, as I point out in my new book Battlefield America: The War on the American People, it really doesn't matter what you call them—the 1%, the elite, the controllers, the masterminds, the shadow government, the police state, the surveillance state, the military industrial complex—so long as you understand that no matter which party occupies the White House in 2017, the unelected bureaucracy that actually calls the shots will continue to do so.

Consider the following a much-needed reality check, an antidote if you will, against an overdose of overhyped campaign announcements, lofty electoral promises and meaningless patriotic sentiments that land us right back in the same prison cell.