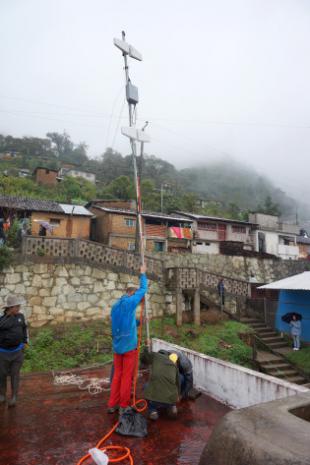 Men wearing rain gear of various impermeabilities cluster above him, holding a 4-meter-tall tower in place. Braided wires trail from four small circles welded near its midpoint; eventually those will be bolted or tied down in order to hold the tower steady during the frequent storms that roll through this part of Mexico's Sierra Juárez mountains. They don't want it falling over every time it rains. Ninety thousand of the town's pesos—a bit over $6,000—are invested in the equipment lashed to the top of the tower, in a town where many residents get by on subsistence agriculture.

The tower—which Hernández, Yaee's blacksmith, welded together out of scrap metal just a few hours earlier—is the backbone of Yaee's first cellular network. The 90,000 pesos come in the form of two antennas and an open-source base station from a Canadian company called NuRAN. Once Hernández and company get the tower installed and the network online, Yaee's 500 citizens will, for the first time, be able to make cell phone calls from home, and for cheaper rates than almost anywhere else in Mexico.

Strategically ignored by Mexico's major telecoms, Yaee is putting itself on the mobile communications grid with the help of a Oaxaca-based telecommunications non-profit called Rhizomatica. Its founder, Peter Bloom, is among the men currently getting soaked on the roof of town hall. It's May of 2014, and this is the third of what he jokingly calls "artisanal cell phone installations" that he's led in the Sierra Juárez in the past year and a half—the first of their kind in the world.