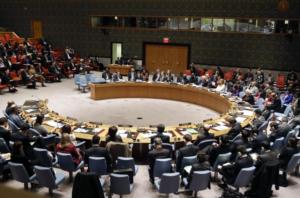 The UN Security Council has rejected a Palestinian resolution calling for peace with Israel within a year and an end to Israel's occupation by 2017.

The resolution failed to muster the minimum nine "yes" votes required in the council for adoption.

The motion received eight "yes" votes, including from Russia and France, two "no" votes from the United States and Australia, and five abstentions.

Riyad Mansour, Palestinian ambassador to the UN, criticised the world body for the failure of the vote.

"The Security Council has once again failed to uphold its charter duties to address this crises and to meaningfully contribute to a lasting solution in accordance with its own resolutions," Mansour said.

"This year, our people under Israeli occupation endured the further theft and colonisation of their land, the demolition of their homes, daily military raids, arrests and detention of thousands of civilians including children, rampant settler terrorism, constant affronts to their human dignity and repeated incursions at our holiest sites."