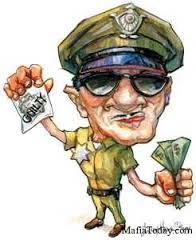 According to the New York Daily News, the practice is known among NYPD officers as "flaking," and officers in Brooklyn and Queens narcotics squads were doing a whole lot of it.

Stephen Anderson, the former detective, was snared along with a group of other officers for "flaking" four men in Queens back in 2008. He is now cooperating with prosecutors and is spilling the beans on the crooked practice of framings and false arrests, often to reach arrest quotas.

"It was something I was seeing a lot of, whether it was from supervisors or undercovers and even investigators," Anderson testified in Brooklyn Supreme Court last week. "It's almost like you have no emotion with it, that they attach the bodies to it, they're going to be out of jail tomorrow anyway; nothing is going to happen to them anyway."

The Drug Policy Alliance, a group that promotes alternatives to the war on drugs, issued a statement calling the case against the officers indicative of larger, systematic failures.

"One of the consequences of the war on drugs is that police officers are pressured to make large numbers of arrests, and it's easy for some of the less honest cops to plant evidence on innocent people," said Gabriel Sayegh of the DPA. "The drug war inevitably leads to crooked policing — and quotas further incentivize such practices."