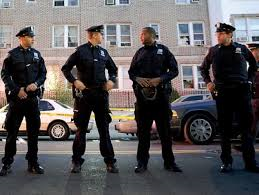 They are given training, guns and shields, not to mention a paycheck and a pension, to do a job.  That's not enough for them. They demand two more things to which they are not entitled: impunity for their violence and protection from harm above all others.

The NYPD was given the nickname "New York's Finest." They are not. Some may be, but the ones who turned their back have no business wearing a shield.  They are untrustworthy.  They are ignorant of their duty. They care only for themselves and their own; they do not care about "them."

These cops are New York's disgrace.

Like others, I sought to quiet the inflammatory rhetoric after the murder of officers Ramos and Wenjian Liu. Their death, like any senseless death, is a tragedy. But not a greater tragedy than the needless killing of Eric Garner and others.

A cop's life is not more valued than anyone else's life.  Some cops think they are. They should not be cops.

As if to emphasize the selfishness, the ignorance, the wrongfulness of the choices of whom to hand a shield and gun, following their act of disgrace, cops attending Ramos' funeral then did what puny, selfish, ignorant children do. They embarrassed themselves further.

What a great day, attend a funeral, turn your back on a mayor, get drunk and violate the same law you use to arrest, and sometimes harm, others, all the time wearing the uniform given you by the people you are supposed to serve.