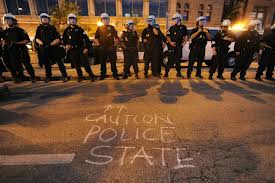 After breaking down the door, throwing my husband to the ground, and screaming at my children, the officers – armed with M16s – filed through the house like they were playing war. They searched for drugs and never found any. I heard my baby wailing and asked one of the officers to let me hold him. He screamed at me to sit down and shut up and blocked my view, so I couldn't see my son. I could see a singed crib. And I could see a pool of blood. The officers yelled at me to calm down and told me my son was fine, that he'd just lost a tooth. It was only hours later when they finally let us drive to the hospital that we found out Bou Bou was in the intensive burn unit and that he'd been placed into a medically induced coma."—Alecia Phonesavanh, the mother of Baby Bou Bou

After a year dominated with news of police shootings of unarmed citizens (including children), SWAT team raids gone awry, photo ops of militarized police shouldering assault rifles while perched on top of armored vehicles, and reports on how the police are using asset forfeiture laws to pad their pockets with luxury cars, cash and other expensive toys, I find myself wrestling with the question: how do you prepare a child for life in the American police state, especially when it comes to interactions with police?

Do you parrot the government line, as the schools do, that police officers are community helpers who are to be trusted and obeyed at all times? Do you caution them to steer clear of a police officer, warning them that any interactions could have disastrous consequences? Or is there some happy medium between the two that, while being neither fairy tale nor horror story, can serve as a cautionary tale for young people who will encounter police at virtually every turn?