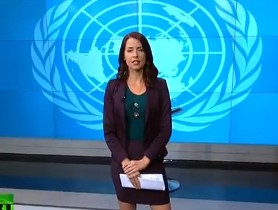 Now the plot thickens with this Ebola crisis. The UN is now set to pass a World Patriot Act. Now, the tyranny is beginning to show and their true agenda is coming to light.So while the world is in a panic over the Ebola crisis, the Power Elite are taking full advantage. Another slight of hand by the diabolical Globalists. Abby Martin speaks with RT Correspondent Marina Portnaya, about a new UN resolution that is being compared to the US Patriot Act, going over how the text could allow countries to increase surveillance under the name of counter terrorism, as well as giving states new tools to crack down on dissent by simply labeling activists 'terrorists'.

Global Patriot Act: Resolution 1373 — in effect, a global Patriot Act — fanned outward from the Security Council. Regional bodies joined the effort, adding action plans and treaties to carry out the new policies. The European Union, the African Union, the Organization of American States, the Organization for Security and Cooperation in Europe, the Association of South East Asian Nations, the Arab League, and other organizations supported the Security Council plan and required their member states to comply with it.

When it passed Resolution 1373, the Security Council failed to link global security law with human rights. For two years, the council's website pronounced that it was other international agencies' business to monitor rights since the Security Council was only in the security business. Countries as diverse as Germany, Vanuatu, Thailand, Russia, Canada, and Ethiopia and more than 100 others adopted comprehensive anti-terrorism laws to comply with Resolution 1373. Although these countries were all following the same instructions, their anti-terrorism laws differed substantially. By the time the Security Council officially expressed concern about the dire human-rights implications of the policies some governments adopted, it was too late. The measures were already enacted. more at url